Posted on October 7, 2014 by Sharon Pomaville

The Sharing Center founder pays visit to agency in Trevor 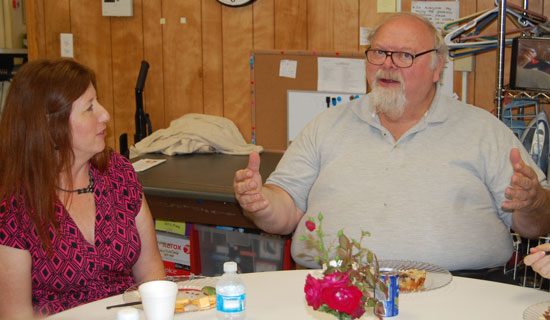 Some 31 years ago, Rick and Kathy Fors started The Sharing Center in Wheatland, as a way to help people going through a rough patch get back on their feet.

Though the Fors have not been actively involved in the relief organization since the late 1990s, the organization continues to serve the purpose of its founders. And Rick Fors knows that for sure, because he visited the center’s current headquarters in Trevor Saturday.

“I am so thrilled,” Fors said of what he saw. “There’s no way I can can communicate how thrilled. I have no words.”

Fors can relate to that wide range of services. When he and Kathy decided to open the center, they thought they would just open a food pantry. An organization providing relief services in Kenosha heard about their efforts and leaders there expressed skepticism that they would be able to keep that narrow focus. And they were right. Within weeks, the Fors found that people who were in need of food were in need of other things too and the mission expanded. They provided clothing and other help, such as a lot of advice about dealing with landlords, even accompanying clients to court proceedings.

The Fors approach was always to try to give people a leg up so they could get their lives back in order. So along those lines, the center provided 10 days of food when other organizations often provided one at a time. But they limited those distributions to three a year, with an additional one at the discretion of the director.

Fors reconnected with the center recently through indirect means. Fors, who now lives in Florida for the winter and back up north in New London for the summer, was passing through Trevor and looked for the center. He didn’t see it in its new headquarters in the old Trevor fire station, but did look up the group on the internet.

“I felt I was behind on my tithe and so I made a donation,” said Fors, who added that he defines tithe as not just for church but also for other good works.

Current Sharing Center executive director Sharon Pomaville recognized the name and reached out to Fors, wanting to meet the center’s surviving founder. Saturday, the center hosted a brunch with current and past board of directors members and Fors, along with some Fors family members.

“It reaffirms to me that it was something God wanted,” Fors said.

This entry was posted in Uncategorized, Volunteer. Bookmark the permalink.